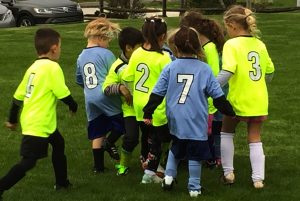 This past weekend, I had the pleasure of stopping by a four-year-old’s soccer game. I watched as these boys and girls had the best time chasing a soccer ball in unison, up and down the field. There were no plays and their techniques yielded to a recurring cheer of, “get it”, kick harder”. It occurred to me, while watching, how similar this scene is to most sales organizations.

Like their four-year-old counter parts, they dress the part and there is often no lack of enthusiasm, but there is something else missing; a good strategy. Many sales teams, armed with no strategy or one that was designed for days long gone by, are also given the same recurring cheer, ‘just go get it, sell harder’.

In times of poor sales results, there is no lack of finger pointing. Blame is spread generously on the economy, pricing, sales compensation, and lack of sales training. If there ever was an example in today’s sales organizations of the similarity to four-year-olds playing soccer, it is watching companies run to one technology tool, quickly abandoning it and running to another as they play ‘just kick it’ with social media, CRM and other selling tools designed to track sales people and catch them doing something wrong.

Have you ever considered it might just be a lack of a sound sales strategy? How powerful is a sales strategy that totally understands what is happening now in your market and addresses it with an executable solution. Technology clearly has its value, but remember the key mission of any technology is to make a process more efficient. If your process is flawed, then your best case is you will achieve failure more quickly.

When was the last time you put your sales strategy under the microscope and held it accountable for the results you seek? When asked, What is your sales strategy?” do you answer it only with a goal or is there a plan attached to that goal and is that plan current?

Having a solid sales strategy is much better than selling like four-year olds playing soccer. A ‘kick it harder’ mentality may occasionally result in the ball finding a chance goal but that might not be good enough to accomplish your mission.